Each side's innings will consist of maximum twenty overs, unless it is all-out or result is achieved earlier.

If the team fielding first fails to complete 20 overs, within 1 hour 20 minutes, play shall continue until required number of overs is bowled.

However, the innings of side batting second will be restricted to the number of overs, it bowled by the scheduled closing time of the first session. The over in progress will be counted as one complete over.

Even if side batting first is all out, after stipulated time of first session, the penalty of shorten overs to play by side batting second, will be imposed.

In case of delayed start or interruption during the match due to ground, light or weather conditions, efforts will be made to extend scheduled closing time up to 90 minutes, to complete 20 overs, (minimum 10 overs) for each side. If it is not possible and innings has to be reduced, the following procedure will be adapted-

The length of innings will be rescheduled after reducing the number of overs, considering the remaining time to play. After extending the time whatever playing time is lost, it will be divided by four minutes for one each over and the fraction will be ignored.

In no case the side batting second will be allotted more overs to play than the side first batted.

To provide equal opportunity of batting to both sides, one extra over may be added in calculations, if required.

A fixed time will be specified for closing of each innings. If the team fielding first does not complete its revised number of overs within specified time, it will face penalty for playing less number of overs accordingly.

The number of overs per bowler will be one-fifth of total length of innings. If this number is not divided by five, and some overs remain, as in case of 17 overs innings, three bowlers may bowl three overs each and two bowlers may bowl maximum four overs each.

If team batting first bats for full quota of overs and interruption occurs in the second innings, then the number of overs with new target score will be rescheduled and overs per bowler as well as circle limitation will also be changed accordingly.

In an uninterrupted match the circle rule (Power play) will apply upon first five and last five overs, i.e. from 1 to 5 and 16 to 20 overs. In fielding restriction overs (FRO) only two fielders shall be allowed out side 30 yards circle and at least two nearby fielders will be in catching position at the instant of delivery.

During non fielding restriction overs, maximum five fielders are allowed outside the 30 yards circle and there will be no catching position restrictions at the instant of delivery.

There shall not be more than five fielders on the leg side, at the instant of delivery.

In the event of an infringement of any fielding restriction, given above, the umpire at square leg will call and signal "No-ball".

Except coach and the captain of the team, no other player will be permitted to inspect the pitch before the start of the match. Nobody will be allowed to hit the ball or any hard object to know the bounce of it. Spike footwear shall not be allowed to run over the pitch. If during the match due to weather condition or any other reason, the pitch becomes unfit for play, it can be changed with the consent of both captains, to finish up the match. The match on changed pitch will be played from where it was stopped on earlier pitch, and not from the beginning.

The boundary of the playing area will be at a minimum distance of 60 yards (54.86 meters) from the centre of the pitch. It can be extended up to 75 yards, if conditions permit. However, at least 3 yards distance should be left between boundary line and the fence.

If an unauthorized person or an animal handles the ball, while in play, the umpire at bowler’s end after considering the speed of the ball and other facts, will decide to declare it a boundary or dead ball or the ball still in play.

Ten minutes break will be taken between two innings. Normally there will be no drinks break during the innings. But in case of excessive heat both captains, with the umpires may agree to have a drink after 10 overs. This drink interval will not exceed than 4 minutes and this time shall be excluded from normal playing time.

The substitute will not be allowed to a fielder who is absent at the start of the game or leaves the field during the play for any reason, except in case of visible injury or reasons wholly acceptable to the umpires.

Any fielder who leaves the ground with the consent of umpires shall not thereafter come to the field during a session of play without the permission of umpires. The umpires shall give such consent as soon as practicable. If a fielder comes on the field of play without consent of umpire and comes into contact with the ball, while it is in play, the ball immediately becomes 'dead' and umpire shall award 5 penalty runs to the batting side.

A fielder returning to the field with the consent of umpires can bowl directly after his return.

Only qualified umpires, from the panel approved by ITCF, will conduct all matches. In appointment of umpires, the neutrality shall be observed and an umpire, as far as possible, should not conduct the match of his own state. However, in case of absence of any ITCF panel umpire, the host association will arrange the local umpire in his place, and the teams have no right of objection to any umpire's appointment.

Wherever, there is provision the third umpire can be appointed by ITCF. He will assist to the field umpires in decisions regarding run out, stumped, hit wicket, caught and boundary, whenever required.

At any time if both umpires find that ground weather or light conditions are so bad that it may be risk of injury to any player or the umpire, if they continue the match in such dangerous conditions, they will immediately suspend play or not allow play to commence or restart, although captains think otherwise.

A result can be achieved only if both teams have opportunity to bat for at least 10 overs, unless a team is all out or a result is achieved in less than 10 overs. Except in condition of awarding the match, in case of refusal to play by a team, the match of less than 10 overs per innings will be declared 'no result'.

Tie- When the scores are equal, it will be a 'tie' and in this case the number of fallen wickets will not be considered to register a win by any side.

If after all possibilities of extending time to complete 20 overs for each side, in an interrupted match, the number of overs is reduced from the innings of team batting second, a new target score will be fixed for it. It will be based on following calculations-

Whenever the number of deducted overs is five or more, it will be multiplied with half of the average run rate, and the sum will be deducted from original target score.

If no play is possible after interruption, the score at closing time will be compared with the score of team batted first at that position (incomplete over, if any to be taken in to consideration). The team having scored more runs at that stage will be declared winner. In case of scores being equal, it will be a 'tie' and number of wickets fallen will not be considered to get a result.

In league matches the points will be as follows:-

In case of teams having equal points to get right to play at knockout stage, the highest 'net run-rate' will determine the right position.

For calculations of 'net run-rate' the average runs per over given by a team to the opposite teams, throughout the tournament, will be deducted from the average runs per over scored by that team against those teams. For calculations full quota of allotted overs will be taken in consideration, even if a team is all out earlier in less number of overs.

In abandoned or no result matches the run rate will not be calculated.

If result cannot be got by setting new target score, the winner will be decided on the basis of highest net run-rate, throughout the tournament, up to the previous match, including all league match scores.

In final match, if result is not achieved, it will be regarded as 'drawn' and both teams will be declared joint winners.

Each side will play alternatively two innings of maximum twenty overs each, unless all out or result is achieved earlier. In the first innings of both sides, 20 overs should be bowled within 1 hour 20 minutes.M/

Each new innings will be started with the new ball only

The interval for change of innings between both first and both second innings shall be ten minutes only while after completion of first innings of side batting second a twenty minutes break will be followed. Except these no other interval for drinks etc will be taken

If a substitute fielder is allowed for a player, by the umpires, and he returns on the field after a duration exceeding eight minutes, then he shall not be allowed to bowl in the innings until he remains on the filed for at least that length of time for which he was absent.

If before restricted period is over the innings of the batting side is closed, he shall not be allowed to bat also when his side’s innings starts until remaining part of his suspended bowling time is over, or five wickets of his side have fallen earlier.

These restrictions shall not apply to the player who suffers an external injury or he was absent from the field for very exceptional and completely acceptable reasons.

The side which scores total runs in excess than the runs scored in two completed innings of the opposite side shall win the match.

In an interrupted match, a result could be achieved only if both sides have completed at least their first innings.

Where due to interruptions the two innings of each side could not be completed the result will be decided on the basis of first innings score of both sides. 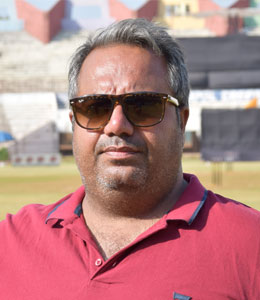 Promoters of the game of cricket and its traditions at the grass roots level in the India by educating and providing quality cricketing and coaching facilities to impact and improve the lives of sports minded people....
- Piyush Rana
FSG ITCF India
Join us on Facebook